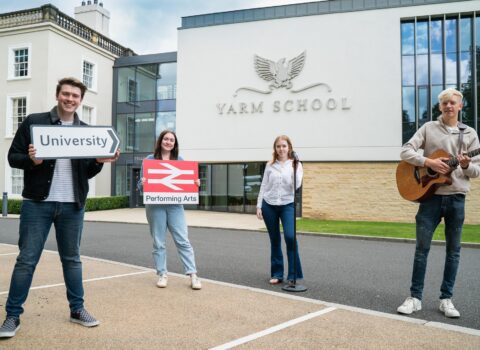 Yarm School Pupils Look To The Future After Exam Success

Once again, Yarm celebrates significant success across the board in GCSE and A Level examinations, and in securing places to study a broad range of courses at university.

School Captain Jack Critchlow, who demonstrated his burgeoning musical talents in the first lockdown by writing and recording an emotive song, The Virus, has secured a place at the highly selective Royal Northern College of Music to study Popular Music. The College is currently home to over 900 students from more than 60 countries.

Jack is celebrating with fellow A Level Music students Ben White and Jamie Wiltshire who have been accepted to study Aerospace Engineering at Sheffield and Mechanical Engineering at the University of Birmingham respectively.

Ben and Jamie are joined by seven other students who will go on to study mechanical, chemical, aerospace, product design, electrical or civil engineering at prestigious universities across the country, including Arkwright Scholar, Lily Brown, who will read General Engineering at Durham.

Three students have set the stage for their future with incredible A Level results in Theatre Studies. Chloe Atkinson, who played one of the leading roles in Yarm’s 2020, sell-out production of Miss Saigon, will continue with her love for performing arts at the University of Exeter, studying English and Drama.

Erin Gilhespie will also pursue her dreams of becoming an actress at Guildford School of Acting where she will embark on a foundation degree in Acting whilst Imogen Hennessey is swapping the script for memoranda, leaving Yarm to read Law at Northumbria.

Another of Yarm’s students with a keen interest in performing arts is Maisie Riley who will pursue a career behind the scenes at The Iver Academy at Pinewood Studios where she will study for her Advanced Certificate in Hair and Make-up for Film and TV. Bella Ruck, who received outstanding marks in her Musical Theatre EPQ and Musical Theatre Singing Diploma, will study Finance and Business at Edinburgh – a university renowned for its musical opportunities.

Among the School’s successful Oxbridge students is Atticus Garlick who is thrilled to have been offered a place to study Maths and Philosophy at Oxford, and Sophie Ashforth who is the sixth Yarm School student in seven years to gain a place reading German at Oxford.

Yarm’s success in healthcare degrees continues, with at least 11 students being accepted onto highly competitive Medical, Dentistry or Veterinary (MDV) courses this year: 9 will study Medicine at prestigious establishments including Manchester, Sunderland, Imperial College London, Nottingham, Leicester and KCL including School Captain, JuJu Mon who will read Medicine and Surgery at Newcastle; one will study Dentistry; and one will train to become a Vet.

Seven of our recent leavers who reapplied for MDV courses this year have also been successful despite fierce competition, including one dentist, one vet and three medics.

Matthew Chapman and Charlotte Walker will study Physiotherapy at Birmingham and Teesside respectively, while Katie Dent has secured a place at Leeds Beckett studying Nutrition.

Of Yarm’s three successful Biomedical Science and Medical Science applicants, international netball star Kaia Harte is celebrating success in and outside of the classroom. Kaia, who has continued training with the Republic of Ireland throughout lockdown, albeit remotely, having represented the team at the U17 Netball European Championships in 2020, has been accepted onto a Medical Sciences degree at Leeds.

Psychology has proved increasingly popular at Yarm, with at least five students proceeding to study it at Bristol, Northumbria, Newcastle, and Durham.

Jamie Pender is also celebrating his superb results and confirmation of a place studying Economics at Exeter in 2022 following his 12 month internship with IBM.

The diverse range of courses offered extends to Physics at Durham for one of our Sixth Form scholars, Henry Flack, who is celebrating fantastic examination results, Cosmetic Science at UAL for Poppy Stephens who joined Yarm in Nursery and Artificial Intelligence and Computer Science at Sheffield for Theo Greening who also benefited from one of Yarm Sixth Form’s fully funded places.

GCSE Pupils Go Above And Beyond Impressive Exam Results

The School is also celebrating the outstanding achievements of its GCSE pupils, with strong exam results in subjects across the board as well as the many examples of outstanding personal achievement as deserved reward for the pupils.

16 pupils achieved eight or more grade 9s, and among the pupils who achieved 11 grade 9s at GCSE is Julia Portsmouth who follows in her sister’s footsteps, achieving a full sweep in examinations all whilst achieving great things outside of the classroom in rowing. Sarah Portsmouth, who left Yarm to study Architecture at Cambridge in 2019 and represented the university in the famous Boat Race this year, was also awarded all top grades at GCSE.

Julia is joined by Eve Kempster and Siya Puthuraya who were awarded eleven grade nines; they are excellent examples of how Yarm’s pupils balance an all round education, making up three quarters of one of Yarm’s J16 boats that rowed at the prestigious Henley Women’s Regatta this summer. Their fourth crew member, Lilian Dufton, also performed extremely strongly in her exams, finishing with a total of ten grade nines and one grade eight.

Julia and Luke Porter achieved 11 grade 9s whilst making significant contributions to the Music Department, specifically the virtual performances put together during lockdown, and were awarded impressive marks in their music exams.

Medha Rajeeva, Josh McGeary, Aishini Paul, Parul Sinha and Kaavya Venkatesh obtained a unique 2020-21 Certificate of Achievement or full Bronze Award in the Duke of Edinburgh this year whilst achieving impressive GCSE results across the board.

Twins, Belle and Will Woodhead, are further examples of pupils who have demonstrated personal development; as well as achieving fantastic GCSE results, they both gained representative honours in hockey for local county teams.

Dr Huw Williams, Headmaster, said: “This year’s results have been the focus of considerable national scrutiny and speculation, but those of us working in schools have seen the determination and resilience of our young people throughout the uncertainty of covid and this has been a humbling experience. I want to commend our staff for their tremendous effort on behalf of the pupils throughout.

“Our pupils and students can be justly proud of their efforts and the results they have achieved after months of focussed hard work. The experience of being at school through the pandemic has provided challenges that have been difficult, at times, but I know this will help to shape their futures and I am very much looking forward to following their careers as they progress through higher education and into their chosen occupations.”