Home » News » The Statistics Are Promising For Yarm School’s Mathematicians

Home » News » The Statistics Are Promising For Yarm School’s Mathematicians

The Statistics Are Promising For Yarm School’s Mathematicians

It has been another successful year for our mathematicians who continue to rank highly in national maths competitions. In the last academic year we have celebrated numerous mathematical successes, such as the three students who placed in the top 25% of the prestigious UK Mathematics Trust Senior Challenge, and more recently we celebrate the achievements of some of our younger pupils in Newcastle University’s Maths Challenges.

Pupils were invited to take part in the challenges during their own time over the February half term. Those who chose to compete had to submit their answers to a series of fun challenges and problems directly to the university.

Fourth Year pupils Rushil Partha, Junior Newton, Jennifer Chan and Roman Andrews and Second Year pupil Avanish Batra from the Second Year were among just 40 out of 455 participants who were awarded prizes in the competition. 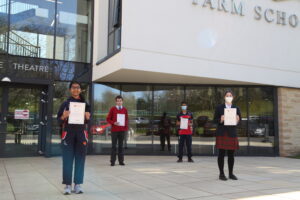 As part of Yarm’s commitment to challenge pupils beyond the curriculum, pupils were encouraged to take part in this annual competition organised by Newcastle University’s School of Mathematics, Statistics and Physics as part of their Mathematical Enrichment. As well as providing pupils across the School with an Enrichment Hub complete with a wealth of curated material specially chosen for each subject, Yarm regularly promotes opportunities to compete outside of school in competitions that support and push the pupil’s learning.

Jennifer said: “I am so delighted to have been placed within the top 10%. It was very fun and certainly very interesting to take part in this test and I am very glad to have had the opportunity to experience this great activity during the half term holidays.”

Rushil added: “Extra-curricular competitions and challenges offer the opportunity to practise what we’ve learnt in school, outside of the classroom. I feel very proud to have finished in the top 40 and I am more eager than ever to take part in competitions like this one.”

Mr Michael Pointon, Teacher of Mathematics and Chemistry said: “This is a great achievement for the pupils. The questions weren’t easy and for some it was their first experience competing against other schools, but they did brilliantly.

Competitions like this one by Newcastle University allow pupils to showcase their maths skills and further their knowledge outside of school. We encourage pupils to take part in extra-curricular competitions where possible and it’s extremely positive to see many of them eager to take part.”