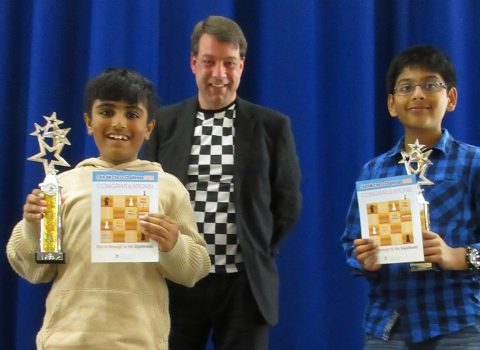 The Princess Alexandra Auditorium in Yarm has played host to the 4th Teesside Chess Megafinal tournament– part of the largest children’s chess tournament in the world.

Around 150 children from 22 schools across the region battled it out for titles, trophies, medals and qualification for the Manchester Gigafinal. Players began competing within their own school and qualifiers for the Megafinals are the top scorers in the tournament, plus leading girls and boys in 12 separate age groups from under seven up to under 18.

A number of Yarm Preparatory and Yarm School pupils enjoyed success in the competition, with some heading to Manchester in July for the Gigafinal.

Arvind Kumar and Rehan Krishnamoorthy shared first place in the Under-7 section, with Arvind taking the Supremo title on a tiebreak. Anjali Ramisetty became the new Suprema and Akansha Mendis played very well to finish just half a point behind Anjali.

George Forshaw followed up his success as an Under-7 last year with a great result in the Under-8 section, taking the Supremo title. Aisling Timmons became the new Suprema. Archie Axtell and Will Foster also played very well and clinched qualification for the Gigafinal with a fine score of 4/6.

Natasha Pointon is the Under-9 Suprema and Noah Coulman, who shared second place with Natahsa, did more than enough to qualify for the Gigafinal.

Aryan Nalawade outscored his rivals in the tough Under-10 section, taking the Supremo title along the way. Isobel McGlade played her best chess to date to claim the title of Suprema.

Aditya Paul and Sabeeh Qureshi also qualified for the Gigafinal.

There was more success for Yarm Prep School in the Under-11 section, with Avanish Batra and Ajay Selvan sharing first place, with the former taking the Supremotitle on a tiebreak.

In the senior section Yarm School was represented by: Saisparsh Sidaginamale, Oscar Thomas, Yusef Syed, Aishani Paul, Benedict Francis, Vignesh Janakiraman and Gautam Sathyamurthy. The competition followed the Swiss formatting and was over 6 rounds. Yusuf was the star performer with a magnificent 5/6, winning the U12 Boys. Benedict was supremo, and Aishani the suprema for the U14 section. These three, along with Gautam and Vignesh go forward to the prestigious Gigafinal in Manchester in July.

Sean Marsh, Yarm School chess coach, said: “We were very proud to host the Teesside Megafinal Chess tournament again, and exceptionally proud of the performance of all our pupils.

“It was a really enjoyable event and we’re now looking forward to travelling to Manchester for the Gigafinal, which will see further stiff competition for our players.”

Michael Pointon, Yarm School chess coach, said: “Chess is hugely successful at the school and our pupils are doing exceptionally well and competing with the very best across all age groups.

“Chess has significant benefits, including developing their capacity for strategic thinking and tactical skills, responsiveness to problem solving and interpretation of others’ thinking.

“We can’t wait for the Gigafinals in Manchester.”