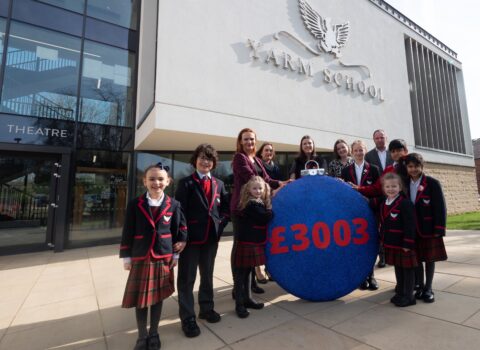 Parents were invited to nominate children’s charities close to their heart with Children’s Cancer North being chosen as it has offered recent support and assistance to the Yarm School community.

The glitzy theme of the fun-filled event was Studio 54 with the school’s Princess Alexandra Auditorium transformed into the famous Broadway disco nightclub for the night.

Bill Sawyer, Yarm Prep School head, said: “Thanks to the amazing support from parents and local businesses, the live auction and raffle were a huge success with the whole event raising £3,003 for Children’s Cancer North.

“It was incredibly enlightening to learn more about the work that this great organisation does to help families in our area. We were particularly keen to support its new Parent Pack initiative, which helps guide those parents new to the Great North Children’s Hospital in Newcastle.

“The 2021 YPSSC Christmas ball was a fantastic event that was very much enjoyed by all who attended. Importantly, valuable funds were raised for Children’s Cancer North. A huge thanks goes to the YPSSC for their sterling efforts to make the ball such a success and to all those who supported it in a range of ways.

“We appreciate that times continue to be difficult for everyone, in particular small businesses, and, therefore, we were incredibly grateful for everyone’s generosity.”

Mr Sawyer added that special thanks also should go to Mona Gupta and family, who provided a large number of decorations and props to transform the venue, Michelle Thomson-Bowen and Barclays, for supporting the ball through match funding, and Mariam Fuentes for graphic design work used to promote the event.