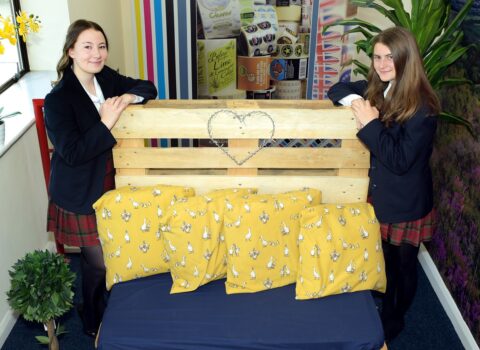 Over the summer break, Senior School pupils were invited to take part in an Upcycling and Eco-Competition. Pupils were tasked with finding something that they no longer used and upcycling it into something they would use.

Second Year pupil, Tenuk Mendis inspired the competition after he saved some tadpoles from inside a bottle (re-introducing them into a local water course) and recycled the bottle that he had found them in. Mrs Leary, Eco-School‘s Co-Ordinator at Yarm School, was very impressed with the entries, but congratulations must go to winners Amy Willis and Megan Broadhead, both in Fifth Year, who upcycled pallets making a bench for colleagues at Amy’s dad’s company, First Choice Labels. The competition runner-up was Third Year pupil Evie Severn, who made a wonderful bedside light using a milk bottle.

Amy and Megan won eco-water bottles and Evie won an eco wooden desk tidy, which will be put to good use for the next school term.

Amy said: “We decided to make a bench for my dad’s colleagues because they have been working really long hours through the entirety of lockdown. We wanted to give something back to them, so we decided to make a bench that they could use on breaks and to relax. I had lots of fun building it with Megan and we’re really impressed with how it turned out.

“Although we enjoyed the project, it also helped us to understand the importance of looking beyond the appearance of something that is no longer useful and thinking about how it can become something else.”

Gina Leary said: “Recycling and being more eco-friendly plays a big part in the curriculum here at Yarm School. As well as being a four-time-winner of the Eco-School’s Green Flag Award, we have an Eco-rep from each tutor group in school who contributes to regular meetings to move new environmental initiatives forward”.

“Our pupils are involved in a number of green initiatives, such as beach cleans and local litter picks. I’m really pleased that pupils are embracing the things they have learned by exploring creative upcycling at home. I was impressed with all of the entries and all of the pupils should be extremely proud of their efforts.”