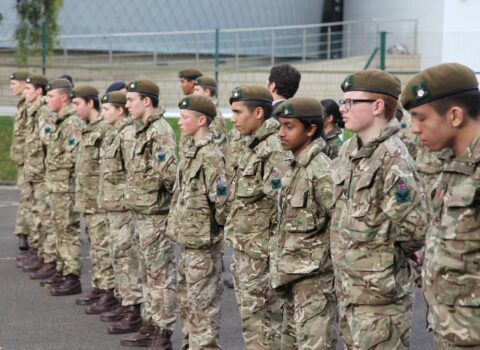 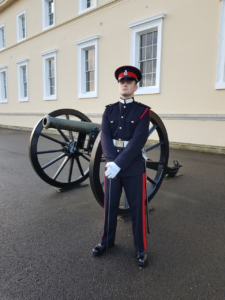 Former pupil, Toby Atkinson has completed his officer training at Royal Military Academy Sandhurst, the British Army’s initial officer training centre that aims to teach all officer cadets how to live by the academy’s motto: Serve to Lead.

Completing this rigorous training programme is a remarkable achievement and so we wanted to catch up with Toby to discuss his experience and learn more about his journey in this military since leaving Yarm.

When did you first consider applying to Sandhurst?

From a young age I had always been interested in the Armed Forces and had been keen to become part of the School’s Combined Cadet Force. I can remember coming away from my first CCF camp at the end of Third Year with the idea of commissioning into one of the Services firmly planted in my head and it was largely thanks to meetings with the recruitment Officers from all three of the Services who came into school every year or so that I set my sights on the Army and Sandhurst.

Once applying online, attending an initial interview at a recruitment centre and gaining a medical assessment pass, I was able to attend Army Officer Selection Board (AOSB) Briefing in Westbury which is a two-day course assessing one’s abilities in the likes of teamwork, academics, leadership and fitness but it is also designed to help set you up for AOSB Main Board with training on the likes of Planning Exercises and outdoor Command Tasks. At the end of Briefing, candidates are categorised from 1 to 4 depending on their suitability to attempt Main Board. Having achieved a category 1 pass I was able to attend Main Board as soon as I wanted to do so. This final stage of the selection process lasts four days and builds upon the areas covered at Briefing with a greater level of pressure being put upon candidates but also an opportunity for the Board to get a very good look at oneself with several interviews, talks and discussions being conducted.

What were the main components of your training over the last year?

At the heart of the course is servant leadership. This begins with the likes of weapons handling, fieldcraft and early morning room inspections to instil military skills and values from which to build upon. Soon the academic component starts to play a big role in the course as you are lectured in War Studies, Defence and International Affairs and Communication and Applied Behavioural Science which works towards an MA in Strategy and Leadership. Alongside this, the military skills training uses light role infantry tactics to focus upon being a leader within the conventional sphere of warfare. Then moving into the Senior term, the focus shifts towards leadership within the contemporary environment with the likes of stabilisation operations and rounding us off as Young Officers capable of looking after our soldiers. There were some long days at Sandhurst but having such a varied programme, I often used to remind myself it wasn’t too dissimilar to Yarm.

What would be the highlight of the experience?

The exercises conducted in the Senior term which focus on contemporary operations with the likes of insurgency, public order and working with NGOs and Host Nation Security Forces. At this point the Directing Staff take a backseat and it is up to the Officer Cadets as to how the exercise plays out. For me, this was the point that I started to feel like a Young Officer.

And there must have been tough and challenging moments too?

Whilst I can recall several occasions of being wet, cold, tired and hungry on exercise, the part of the course I would least like to repeat would be weeks 1-5. The first five weeks are all about instilling military bearing and basic soldiering which largely consists of late nights of polishing and ironing and early mornings of being informed of how inadequate you are at polishing and ironing. Sleep becomes a true luxury and the first leave weekend at the end of it is well earned.

How will you best remember the day of the passing out parade?

I think every Officer remembers their Sovereign’s Parade but 2 Platoon Blenheim Coy will remember theirs a little stronger than most. The day started with us being told that there had been a positive Covid test within the platoon and therefore we were not able to be on parade and were going to have to self-isolate at Sandhurst potentially until Christmas Day. However, then we made Sandhurst history by having our own Sovereign’s Parade that afternoon and were also told by Environmental Health that we were allowed home after being locked in all term; it was a real rollercoaster. The stand out moment though is the sense of pride but also relief as we marched up the steps and entered Old College and I knew that the 44 weeks had been completed.

What are your immediate plans now and how do you see your career developing?

Having been commissioned into the Royal Regiment of Artillery I will complete the 14-week Young Officers’ course at the Royal School of Artillery in the New Year. From here I will then spend two years as a Troop Commander leading around 30 soldiers. During this time the dream would be to be deployed on some form of operations, however, I also hope to participate in the Army’s large-scale exercises in the likes of Kenya and Canada as well as international exercises working with partner nations. After my Troop command is finished there are countless next steps my career could take but I am particularly interested in taking up a posting at a Phase 1 Soldier Basic Training Establishment – a hugely important job and I think it would be a real honour to undertake. 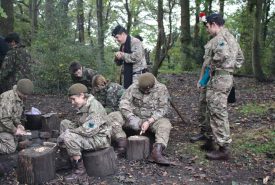 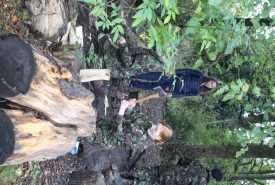