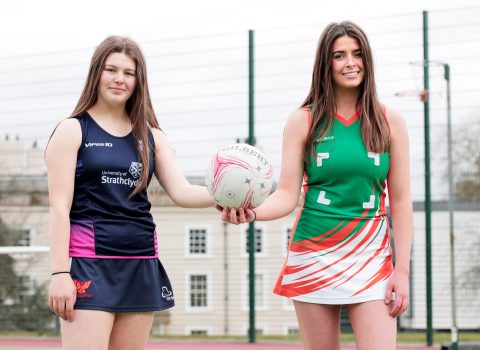 We’re celebrating international netball success at Yarm School. Kaia Harte and Poppy Gratton were both selected to represent their country in the U17 Netball European Championships.

The following weekend on Friday, 6th March – Sunday, 8th March, Poppy represented Scotland in the U17 European Championship. The Championship was held at the Ebbw Vale Leisure Centre in South Wales and featured competition from England, Wales, Northern Ireland and Switzerland. Scotland displayed excellent teamwork and determination throughout the championship and following two strong wins against Switzerland and Northern Ireland, finished in third place.

Kaia said: “I am so proud to have represented The Republic of Ireland at the U17 Challenge. It felt amazing to walk away winners. I am also happy that Poppy made it to the Championship with Scotland, she played incredibly”

Poppy said: “It was an amazing experience to represent Scotland at the European Championships. I couldn’t be prouder of my team or our performance! It’s amazing that Kaia was picked as player of the tournament for Ireland in the Challenge Cup, she played so well. Both myself and Kaia are very grateful to our coaches for getting us to this level.”

Yarm School headmaster Huw Williams said: “Yarm School celebrates so much success across many sports. I am delighted for Kaia and Poppy. To be chosen to represent your country is an honour and they have done themselves and Yarm School proud.”

Netball is just one of the 100+ activities and clubs available to all of our pupils here at Yarm School. Discover more about our extra-curricular opportunities.