Two former Yarm School pupils and 1st XV players came face-to-face not once, but twice in the Gallagher Premiership 2020/21.

Zach Kibirige and Ben Stevenson started their rugby careers at Yarm where they played for the 1st XV team, before both signing with the Newcastle Falcons for their first taste of professional rugby.

Zach joined Yarm in Reception and left Upper Sixth in 2013, signing his first professional contract with the Newcastle Falcons at the age of 18. He represented England in the under 17, 18 and 20s squads, scoring a solo try in the 2014 Six Nations match against Wales. Zach left the Falcons in 2019 and made his debut for Wasps against London Irish at Ricoh Arena. Zach decided to study alongside his training and since leaving Yarm, has also obtained a degree in Psychology from the Open University.

Ben, three years younger, signed senior academy terms with the Newcastle Falcons in 2016 after completing his studies at Yarm and in the same year, made his first debut at Saracens in the Anglo-Welsh Cup. He scored his first senior try against the Harlequins in the Premiership Rugby Cup 2018/19 and made his Premiership debut with the first team two weeks later. Ben has also made big moves off the pitch, finishing his Law degree at Durham University in 2019. 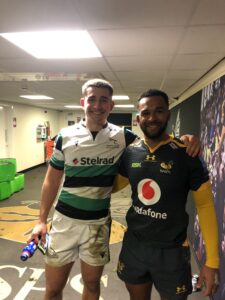 On Saturday, 5th December 2020 the pair came head-to-head at the Ricoh Arena in the Gallagher Premiership 2020/21. Both players had an incredible game, with Ben taking two tries in the second half including a 60m interception and Zach supporting fellow winger Paolo Odogwu with a quick one-two into a clear try. Newcastle Falcons walked away victorious with a 27-18 win. The pair battled it out again in March, giving the Wasps the chance to level the playing field with a 20-18 victory.

What is your favourite memory of rugby at Yarm and when did you first consider pursuing rugby professionally?

Zach: I played rugby all throughout school and was lucky enough to enjoy a ‘dads and lads’ tour to Toulouse during my first year at the Senior School. The 2011 tour to Australia was particularly memorable for me and I also had the pleasure of playing alongside my brother that season which I had never done before or since. The people I trained and played with throughout my time at Yarm were amazing. I know I wouldn’t have enjoyed the sport half as much if I wasn’t playing with my family and friends.

My favourite memory has to be winning the Daily Mail Vase at Twickenham when I was in Upper Sixth!

I think I first considered professional rugby as a career the moment someone told me I could turn my hobby into a job, which was around the age of 15/16.

Ben: I loved that I was able to play rugby with my best mates a few times a week at Yarm. We also got to go on some great trips and tours as a group; my personal favourites have to be the rugby 7s trips to Rosslyn Park and the 2015 rugby tour to Argentina.

I’d always enjoyed rugby but I don’t think I considered pursuing it professionally until I first started at the Falcons Academy when I was around 15 years old.

Why did you choose to study alongside your rugby career?

Z: Rugby is obviously a relatively short career so it seemed sensible to upskill and gain qualifications before even considering retirement. I chose psychology because I always enjoyed it and found it particularly interesting at school, so I knew I’d be able to stick it out alongside a professional career. The part-time schedule of Open University gave me the flexibility to complete my undergraduate degree whilst still making rugby my priority.

B: I knew that, realistically, it was unlikely that I would be playing for the first team regularly during my first couple of years in professional rugby, therefore I thought studying would be a good use of my time. Also, you can’t play rugby forever and there is always a risk that it could end prematurely because of injury and so I definitely saw the value in having something to fall back on. I chose to study law because it’s a vocational course and could lead to a job that suits the skills I developed at A Level, particularly in History and Economics.

What are the highlights of your rugby career so far?

Z: There’s been a few, but winning the Daily Mail Vase with Yarm is definitely still up there!

Making my professional debut with Newcastle at 17, knowing my family and friends from school were in the crowd watching, was pretty special. As was being capped by England at each age group and with the 7s team – it’s an honour I’ll never forget. More recently, reaching and playing in the Premiership Final with Wasps in 2020 was a great journey and experience even though it was disappointing not to win.

B: So far, this entire season has been incredible. It has been a great experience to start almost every week in the Premiership and something I don’t think I’ll ever forget.

Have there been any challenges or tough moments during your career?

Z: After making my Premiership debut in 2014, I suffered a serious ankle injury that kept me out of the game for 14 months. Luckily, I think I was optimistic enough to stop it from phasing me too much. I also found the relegation with Newcastle tough, but it is great to see the club have bounced back so strongly!

B: Unfortunately, in my two first seasons playing professional rugby I was out for a cumulative length of one entire season which was quite challenging. I missed being on the field with my team, doing what I love. Being able to focus on my degree helped though as I was able to take my mind off rugby and the fact I couldn’t play.

How has the pandemic affected you?

Z: When the season was initially postponed, I found living in the unknown really challenging – we were all trying to keep fit at home but had no idea what we were working towards or when we might restart. Since restarting, there have been a lot of extra hoops we all have to jump through but whilst they can be frustrating at times, nothing compares to the disappointment and lack of atmosphere that comes with playing without the fans in the stadium alongside us.

B: The last few months of our season in the Championship was cancelled and so we weren’t able to win or celebrate as normal, which was a massive shame. This year has been even stranger as we have been playing without crowds – it has completely taken the atmosphere out of the game!

How does it feel to go head-to-head with one another?

Z: It was a lot of fun and particularly surreal for me lining up against so many former teammates from Newcastle as well. It heightened all my emotions, so I found it even more disappointing to be beaten by them in the first game and even more satisfying to win the second. Having prior knowledge of a player is advantageous but the game is so complex and dynamic it would be daft to get caught up in that – you just have to go out there and play your best game.

What are your immediate and long-term plans and how do you see your career developing?

Z: I’m looking to enjoy the next two years at Wasps and continue improving as much as possible. My longer term plans will include experiencing as many different aspects of psychology as possible to help further my learning in that field.

B: I have no immediate plans really, I just want to see how far I can get and will continue training and playing hard to get myself there.

Do you have any advice for anyone looking to pursue rugby further?

Z: Just enjoy it! It’s the reason we all start playing in the first place and it’s important not to forget that or lose your passion for the sport. Other than that, work hard, help others and always look at yourself first.

The selection process is tough and I had plenty of rejection along the way, but it’s important not to lose sight of the goal and understand that whilst it won’t be a smooth journey, it will be worth it in the end. Training also isn’t easy, but there is nothing quite like being able to go to work with your friends every day, improving side-by-side and showing off how good you can be.

B: Don’t let setbacks deter you from pursuing rugby if this is a career you really want. There have been plenty of people, including myself, who have been dropped at various points throughout their career and have come back from it.

Whole School Open Morning - Sat 24th Sept, 9am-12 noon Discover the happy and fulfulling experience we offer for pupils from Nursery to Sixth Form and explore our superb facilities for yourself.