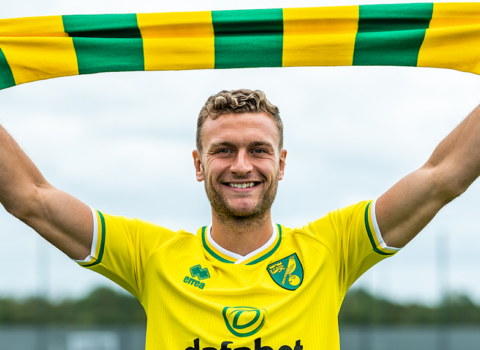 Home » News » A Game Of Two Halves: Former Pupil Shares the Ups and Downs of His Football Career

Home » News » A Game Of Two Halves: Former Pupil Shares the Ups and Downs of His Football Career

A Game Of Two Halves: Former Pupil Shares the Ups and Downs of His Football Career

Former pupil, Ben Gibson, has completed a permanent £8million move to Norwich City having played an essential role in the team’s return to the Premier League.

Ben joined Yarm Preparatory in Year 3 and continued through to the Senior School, leaving for a scholarship with Middlesbrough Football Club that he secured at the age of 16. These two year scholarships are open to 16-year-olds who are already playing at an academy and want to make the next step into professional football.

At just 17, Ben signed a four year professional contract with Middlesbrough and was already living out two of his childhood dreams and career goals: playing at a professional level and representing his hometown and the club he has supported since being a young boy. During this time Ben had a few spells at lower league clubs, giving him the chance to learn his trade and eventually seeing him break into Middlesbrough’s first team.

Whilst Ben dedicated much of his spare time to football, he still made the most of the extra-curricular opportunities on offer at Yarm and represented the School in tournaments and on trips in cricket, athletics and rugby.

Ben has had a rollercoaster of a career and faced many ups and downs; we spoke to him further about what he has been up to…

When did you first consider pursuing football professionally?

All I ever dreamt of was becoming a professional football player playing for the club I support, Middlesbrough. I went one better and even got to captain my hometown club after a promotion in the Premier League.

There were people along the way that didn’t take my ambition to become a professional player seriously, but I was determined to make my dream a reality and I feel extremely lucky that I have been able to do so. My friends, family and the School always supported me and understood the demand that was on me from a young age.

What have been the highlights of your career so far?

In my first full debut for Middlesbrough I scored a last minute equaliser and we were promoted to the Premier League. The Riverside Stadium was full (around 35,000 seats) and fans stormed onto the pitch in celebration at the end. I’ll never forget the smiles on everyone’s faces in that moment – my friends and family, my partner, my teammates and the fans. The following week was a surreal experience; I was living on cloud nine and the whole town was buzzing.

No one can ever take that moment away from me, it was an unbelievable experience and one I’ll never forget.

I have also been called for a few England squads over the years and that is always a great feeling as there is no higher accolade for a professional player. Unfortunately, I didn’t have the chance to make a cap but there’s still time!

I consider the last few years a highlight in terms of my strength as a person. I had been knocked down for a couple of years during my time at Burnley but I persevered and continued training hard and ended up signing for Norwich City. Not long after, we were promoted back to the Premier League and I can’t wait for the season to start. Whilst I had a couple of tough years, I proved to myself that I have the character and strength to get through anything and I think that’s something to be really proud of.

Have there been any challenges or tough moments during your career?

In 2018 I signed to Burnley. I was bought for £15m which was equal to the club’s highest transfer fee but I never really had the opportunity to show what I could do.

My two years with Burnley had to be two of my toughest years both in my career and in my life generally. I was working as hard as any other player and I even employed my own sports scientist to work with me on evenings, all to make sure I was doing everything I could to be in the best shape possible and make the team. However, the opportunity never came.

It was really getting me down and because I’ve always been a happy-go-lucky character, it was just as hard for the people around me as well.

That’s life, though and sometimes things aren’t going to work out as you imagine. Yes, it was a really tough time for me and I had to overcome some obstacles, but I’ve bounced back and I believe that the whole experience has made me stronger and more resilient and I’m definitely ready for the next step in my journey.

Do you have any advice for those facing obstacles in their careers?

It can be difficult to motivate yourself to keep on going and keep on striving to accomplish your goals, but you know it will be worth it in the end. Instead of focusing on what’s not going right, set some short-term goals and look at how you can start making positive changes to achieve those.

What are your immediate and long-term plans and how do you see your career developing?

I’ve recently signed to Norwich City permanently and I’m delighted – I love it here. It’s a great club with a brand of football that suits me. I’m focusing on getting my ankle fixed which will include rehabilitation over the summer so I can come back fit and flying to start the Premier League season well.

I’ve not given up on representing England and would love to be able to impress the England Manager enough to be called to play for my country.

Do you have any advice for anyone looking to pursue football further?

In all honesty, football is easy to get into as there are so many local teams and training academies to join and be a part of. However, the percentage of young players who want to become professional footballers is massive and so there is always a lot of competition out there.

You will be up against some very talented young players but in my experience, talent isn’t everything. I think I am talented, but I have played against people more talented than me that haven’t made it because ultimately, I had a stronger work ethic and was more committed to becoming the best player I could be. I would say I outworked a number of players my age as I practised every day, whenever I had a moment to spare. Even now, I do as much as I can and I have always gone above and beyond what is expected.

It’s not just about the training either, you have to dedicate everything to it: nutrition, sleep, technical work, physical work and more. It isn’t easy but in my opinion, as long as you know you are doing everything you can, you’ll have no regrets or ‘what ifs’.

When did you become an Ambassador of Teesside Hospice?

I became an Ambassador in 2017, around the time I left Middlesbrough FC. Teesside Hospice have a special place in my heart because they cared for my Nanna in 2001 – I have seen first-hand the great work that they do for the patients and their families. They do incredible work there and help turn what can be a deeply upsetting and horrible time in a family’s life into something memorable for the right reasons – I wanted to help ensure that many more families could receive the same level of care that my Nanna had.

Since becoming an Ambassador I have helped raise almost £40,000 through signed shirts, auctions and other sponsored initiatives with Middlesbrough. Last year I launched a 26 kick-up challenge over marathon weekend to replace the number of marathons that weren’t able to go ahead. We raised over £25,000.

Charities and hospices everywhere were struggling when the pandemic hit because many of the fundraising activities they rely on were being cancelled. It takes around £5,000 of charitable money a day for Teesside Hospice to be able to run, so it was essential that we continued finding ways to raise money in a safe way.

I’ll always support them as much as I can and hopefully we can do more together in the future.

How has the pandemic affected football?

This last year has been really strange. We’ve gone from playing in front of tens of thousands of people in some of the biggest stadiums in the world, to playing in front of around 50 people who were all team staff. I feel really lucky to have been able to continue going to work as I know some people haven’t had that chance.

I know everyone in football can’t wait until the fans are back and we can play the sport we love in front of the people who love it.

If you could have your time at Yarm again, would you do anything differently?

I wouldn’t change anything about my time at Yarm. It was always challenging for me as I was committed to both school and to football, training three times a week at the academy as well as playing matches on both Saturdays and Sundays. I put a lot of work and hours into both and made a lot of sacrifices as a young boy, but now I’m living out my dreams and I wouldn’t have it any other way.

I also feel extremely grateful for the lifelong friendships I made and that’s more important to me than anything. Three of my closest friends, who I know will be by my side forever and our kids (when we have them) will be friends, are from school and they’ve been there for me throughout everything.