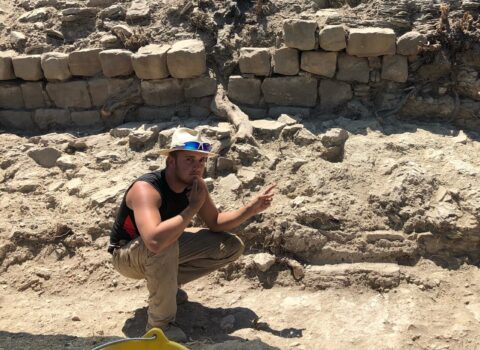 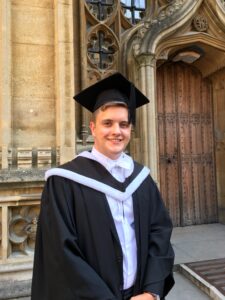 Former pupil, Alex Bridges, has been offered a place to complete a PhD in Archaeology at the University of Edinburgh where he intends to continue his research on iconoclasm.

Alex left Yarm in 2015 with A Levels in Physics, Maths, French and Latin, and went on to study Classics and French at Lady Margaret Hall, The University of Oxford. After graduating, he travelled to France to study his Master’s in Archaeology at Université Paris 1 Panthéon-Sorbonne during which time he immersed himself in research into iconoclasm. His studies flagged a number of unanswered questions and after encouragement from his professors, Alex decided to apply for his PhD at the University of Edinburgh.

During his time at Yarm, Alex played rugby, was involved in the CCF and was a keen performer, taking to the stage as part of the choir and various school musicals. He took part in the first musicals to take place in the then new Auditorium, including Bugsy Malone, FAME and Grease in which he played the leading role, Danny.

We caught up with Alex to learn more about his journey in archaeology since leaving Yarm.

When did you first consider applying for archaeology and why?

I discovered archaeology somewhat by accident. I studied a slightly unusual combination of subjects at A Level which didn’t necessarily lend themselves to a specific career. I chose to study a joint schools degree in Classics and French because those were my favourite subjects at school, without a clear plan for what to do after graduating.

I think the privilege of the fantastic education I had at Yarm gave me the freedom to pursue my interests in that way. It was during my second year studying at Oxford I realised that I could specialise in archaeology, and I decided to take part in an excavation to see if it was my cup of tea – I was hooked from day one.

What advice would you give to a student who may be uncertain about their future direction or university course?

I was at university with some people who were 100% certain what they wanted to do in the future, but I would confidently say that they were in the minority. Not being sure about what to do is completely normal, and doesn’t mean you’re doing anything wrong. I don’t claim to have made only good decisions about the future, but my advice is to err on the side of doing what you enjoy, and to be open to tweaking your plans if new opportunities present themselves.

Why did you choose to complete your Master’s in Paris?

There were a few reasons I chose to study abroad. Firstly, my combined undergraduate degree gave me a good level of French, and I didn’t want to lose that skill. Secondly, my undergraduate year abroad was an incredible experience, spending a year in the South of France working, having new experiences, and meeting new people; I decided that if there was a way to combine my love of languages with archaeology, that would be worth pursuing.

Paris also has some of the best universities in the world, not to mention the largest museum in the world, so it appealed to me. Last but not least, postgraduate study can be expensive and funding is not always guaranteed. The cost of university in France is significantly less than in the UK, which made a Master’s in France a very attractive idea.

What have you enjoyed most about studying archaeology?

Digging! For me, the best thing about archaeology is that every summer you are able to swap your books for a trowel and you actually have the opportunity to come face-to-face with the history you’ve been reading about in the library. For example, in 2019 I spent a month excavating a hilltop in Sicily called Halaesa Archonidea, carefully removing the plants that had grown over the site, and then taking away the soil layer by layer to see what we could discover – it was awesome!

Is there a particular field you are most interested in?

I study classical archaeology which focuses on Greek, Roman and Egyptian culture around the Mediterranean. I studied Latin for six years at Yarm and my teacher, Mr Hall, is the reason I love Roman history so much.

More specifically, my research is on iconoclasm, which was the destruction of statues in Greece and Italy when Christianity was growing in the 4th and 5th century. I think that we focus a lot on the birth and life of statues – who sculpted them, who used them and how? – and I want to better understand the end of their lives – when and why were they abandoned, or even damaged.

Have there been any challenges or tough moments whilst studying archaeology?

Having come to archaeology via a slightly unusual route, I don’t always understand things that seem obvious to my fellow students. However, this weakness can also be a strength, because I have a different perspective and notice things that others might miss. It can also be tricky studying in a foreign language – sometimes you have to be very quick with the dictionary during lectures so you don’t miss what’s going on.

I plan to take my career one step at a time. First, I need to finish my Master’s, and then get started on my PhD which I will hopefully start in the autumn. My supervisor at Edinburgh University, Prof. Eberhard Sauer, is an expert in my field, and was extremely generous with his time when I first contacted him about doing a PhD. Edinburgh is a great university, so it’s a match made in heaven.

I’ve learnt that plans are useful but need to be flexible. When I left school I had no idea that six years later I’d be in Paris researching 2000 year old statues! Some of the best opportunities I’ve had since leaving Yarm have happened by accident, and so in some ways I am always looking for the next happy accident.

Long-term, I want to keep learning and gain as much experience as I can. Archaeology is a diverse and growing discipline, and I hope to contribute to our understanding of how people in the past lived and thought.

Do you have any advice for anyone looking to go into this field?

Read! If you’re curious about history and how we know what we know about life in the past, there are some great resources out there. The BBC documentary Civilisations is a great introduction to ancient art around the world, and Three Stones Make a Wall: The Story of Archaeology by Eric H. Cline is a fantastic place to start learning about the greatest discoveries in archaeology.

Teesside is full of history too, and Hadrian’s Wall is only an hour away. There’s nothing better than hands-on experience and there are projects in the North East that are open to everyone. These normally run in the summer, and are a fantastic way to get involved and see if excavation is for you… archaeology.co.uk and teesarchaeology.com are the best places to start looking.

If you could have your time at Yarm again, would you do anything differently?

My best memories from Yarm all stem from taking a risk and trying something new. If I had my time again, I hope I’d be brave enough to try even more things because there is a huge number of extra-curricular activities on offer. For example, I never considered rowing at school and it was only at university that I tried it and found out I loved it. Who knows what other gems I overlooked in the activities sign-up sheet!