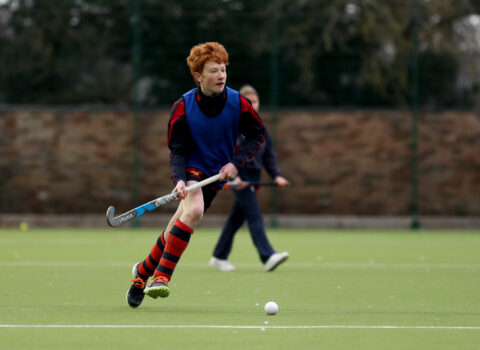 We’re celebrating more sporting success as Fourth Year pupil, Will Ferguson, has been selected for the England Under-16 Assessment hockey squad.

Will was chosen for the national assessment squad after catching the eye of selectors while playing for the Pennine Pumas (North of England) in the Futures Cup in St Albans.
The Futures Cup brings together teams from the North, South, East and West of England and Scotland and Wales, and is the selection tournament for the national age group squads at under-18 and under-16 for England.

Despite being an U15, Will made his mark in the regional squad by opening the scoring against the East in a match that ended in a three-all draw. In a bronze medal match against Scotland, he equalised the score before the opposing team hit the winning goal in the dying seconds.

The assessment squad will see Will attend a series of training camps across the country, including two days at Warwick University and three days at Lilleshall National Sports Centre in Shropshire. Of the 38 players, 25 will be selected to represent England in 2022.

Sixth Form students, James Beck and Molly McDermott, also played for the Pennine Pumas in the U18 tournament. All three players have been through an extensive selection process which has worked through County and Regional Performance Centre squads to get to this level.

Headmaster, Dr Huw Williams said: “Yarm School has a proud history of sporting success, believing that it is important to support and develop individuals with the talent and potential to gain representative or club honours.

“All three players deserve to be commended for their sporting prowess on the hockey field and their dedication and commitment to the sport over many years. They have done the North East and Yarm School proud.

“They each had to go through an extensive selection process to be selected for the Pennine Pumas, which is a significant achievement in itself and Will’s call up to the elite assessment squad is just fantastic.”