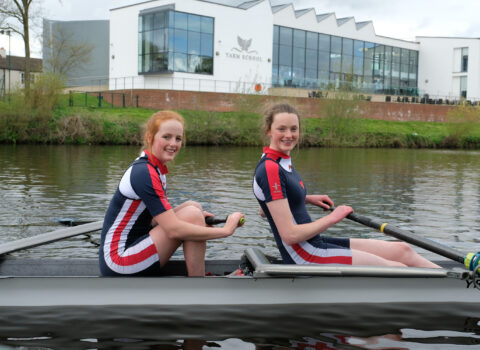 Katie Anderson and Sarah Portsmouth first started rowing together as pupils at Yarm, where they were both made School Officers in their final year, and represented GB in the under 18 women’s pair at the Coupe de la Jeunesse in 2018, winning a bronze medal.

This was the pair’s first taste of rowing at a representative level. On Sunday, 4th April they will embark on another sporting milestone together, but this time they’ll be lining up in opposite boats.

The pair parted ways in 2018 when Anderson left Yarm for Brasenose College, Oxford to read Economics where she secured the stroke seat of Osiris as a fresher. The selection process is ongoing throughout the season and is based on a combination of erg scores, seat racing and how a crew moves together. By 2019/20, Anderson had progressed into the prestigious Oxford blue boat.

Portsmouth, a year younger, continued to row for Yarm after Anderson left, her sights set on Cambridge’s light blue hue. In 2019 she headed to Newnham College, Cambridge to read Architecture and achieved her goal of being invited to represent her university in the blue boat.

Anderson said: “Most of my best memories and greatest achievements in rowing while at Yarm were with Sarah, so to have the opportunity to go head-to-head in such an important race, and another milestone in our rowing careers, is really special. We might not be in the same boat, and on April 4th I will be lining up to beat Cambridge by as much as possible, but we are still great friends and I’m proud to row against her.”

Portsmouth said: “It feels great to know that Katie and I have both achieved seats in the blue boats – it was something we spoke about a lot in school when Katie received her offer from Oxford and I was applying for Cambridge.”

Both athletes balance demanding university degrees alongside twelve training sessions a week and a gruelling selection process. Whilst they are seemingly putting their partnership aside to race against one-another in the celebrated Oxford vs Cambridge duel, there is still much mutual respect and appreciation for the dedication and hard work the opposing rowers and clubs put into training all year round.

Anderson said: “Knowing someone in the crew doesn’t change how much I want to win. I’m not driven to beat individuals; we’re driven to beat Cambridge. In many ways, rowing against an old teammate helps reinforce that the two clubs have a lot of similarities. We are all student athletes, balancing hard training schedules with our degrees, motivated by the same goal of winning the Boat Race.”
Portsmouth said: “We have an amazing friendship that I value so much but that doesn’t mean I won’t be giving everything I’ve got to beat her and Oxford.”

Yarm School has a proud reputation for producing rowers who go on to compete at the highest level. Since 2000, six Yarm students have represented their country at either full or under 23 level and a further nine at under 18.

Headmaster Huw Williams said: “Katie and Sarah are continuing Yarm School’s proud rowing tradition. Competing in the most famous race in the world is a fantastic achievement which very few rowers get to experience, but it’s clear that our beautiful stretch of the River Tees is a fine place to learn!

“We are all incredibly proud of them and are just disappointed that we can’t be there on the riverbank to cheer them both on.”

Andy Guest, Master in charge of rowing at Yarm School said: “I am absolutely thrilled for Katie and Sarah. I have been privileged to coach some exceptional athletes and since the investment in the new boat house the facilities for our rowers are second to none.

“All the coaches and I thoroughly enjoyed working with Katie and Sarah when they were students at the school. They are two very talented rowers and deserve their success. I am looking forward to watching the Boat Race and will of course be impartial, but glowing with pride.”

Katie and Sarah spoke to Tyne Tees and The Guardian ahead of the race.